We are a non-profit organisation

Our objective is to develop business activities, promote trade, and in turn, deepen the relationship between Australia and Southern African countries.

Benefits include what you need to know about doing business in Southern Africa, and whom to speak with.  View our membership presentation flyer for more information 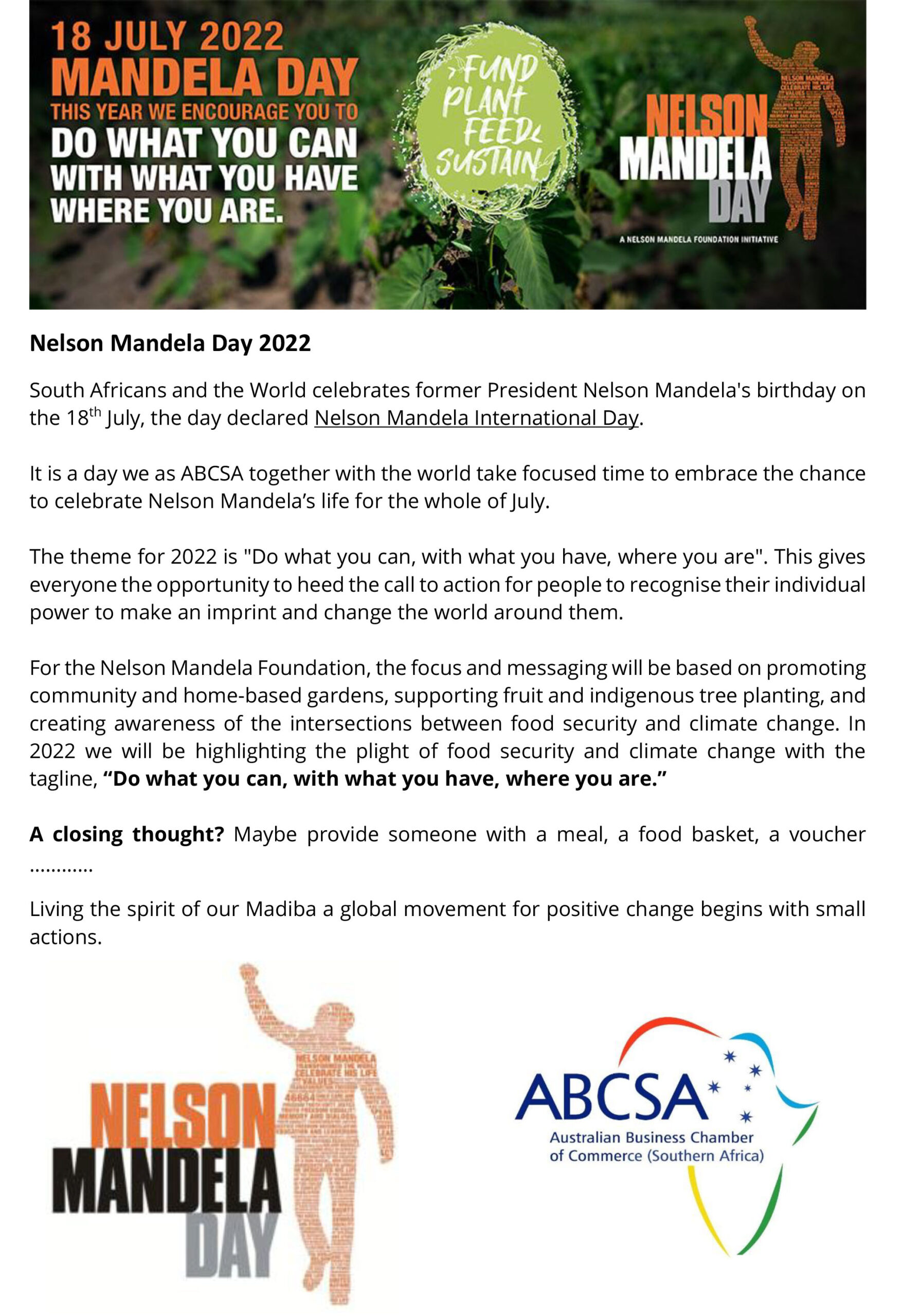 The Australian Business Chamber of Commerce Southern Africa (ABCSA) were delighted to host an Australian Mr Mark Cutifani, the former CEO of Anglo American, to a round table discussion on leadership.  Mark took up the Anglo American CEO role in 2013 which was the first year on record, that Anglo American made an annual financial loss, a pivotal moment for the company formed in 1917 by Earnest Oppenheimer.  During Mark’s nine year tenure at Anglo American, he doubled the company’s share price by the time of his departure in 2022.

The ABCSA event was held at the beautiful Growth Point venue at Workshop 17 West Street, a flexible office and auditorium located in the heart of Sandton. The auditorium comfortably seated the attending diplomats, high level government officials and likeminded ABCSA members.

As chairperson, Judi Nwokedi started proceedings with introductions and a video showcasing Anglo-American Platinum’s deployment of the world’s first Hydrogen Haulage Truck at the Mokalakwena mine.

The excitement of the Hydrogen Haulage Truck in South Africa was greeted with great applause as Anglo-American are really making a difference with Green House emissions all starting in South Africa under Mark’s leadership.  Mark then gave further information around the video and the role he played.

Mark has an amazing ability to capture the moment and hold everyone’s attention. Attendees were given spectacular insights into not only Anglo American, but how some of the other major mining houses operate in which he played a leading role including Anglo Gold Ashanti, Western Mining Company, Sons of Gwalia, Inco Ltd and Vale.

Mark gave passionate accounts of how Anglo-American work with its stakeholders including all levels of government and local communities with a strong focus on community upliftment and workforce inclusion.

At question time, Mark engaged with every question from the audience and gave detailed and thorough responses. At the end Mark generously shared his email for delegates to contact him, an example of his warm respect to the attendees.

We thank you Mark for choosing to spend time with ABCSA in Johannesburg, South Africa during the busy Mining Indaba period.

ABCSA will be hosting more events of this nature soon, watch this space. 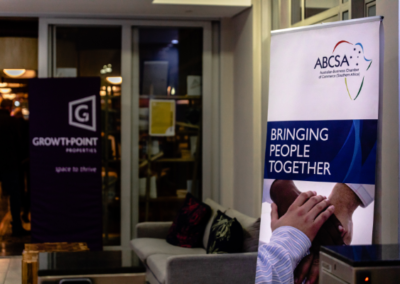 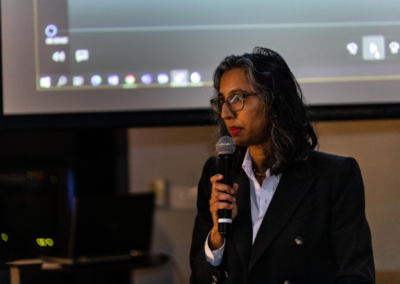 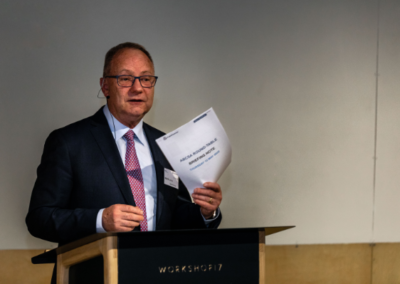 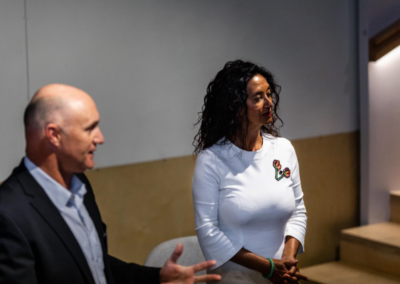 Check out our gallery for more images from recent events Welcome to our newest members

Worley is a global company driven by a common purpose to deliver a more sustainable world. Worley’s ideas have switched on the lights in a million Kenyan homes. They’ve provided fresh drinking water to local communities and transformed waste products into clean energy.

Beech Veltman Inc. is a boutique law firm with a specialist team in mining, infrastructure, and natural resources. Our multi-disciplinary firm is structured to provide maximum flexibility and the ability to adapt and be responsive to client needs and fee sensitivity. The team has a combined experience of over 70 years and are regularly recognised in global rankings and directories.

To all potential Mining Indaba 2022 visitors,  this year, Austrade has been fortunate enough to have great sponsors in Telstra, Geodrill Australia, and Australian Securities  Exchange (ASX),  which means that different to previous years, Australian companies participating in their program will not be charged to participate in their program.

Mining Indaba – Register for the 2022 edition

While their program is not within the Mining Indaba Exhibition and Conference itself at the CTICC, it is right next door (at the Hotel Sky 9, 11 and 12 May) and ENS Africa Offices in Cape Town 10 May.

Austrade’s program, on the edges of Mining Indaba, aims to have something of interest to all Mining in Africa stakeholders and Australian companies attending Mining Indaba. With the exception of the program at ENS offices on Tuesday 10 May, for which invites will be sent out separately, all other events are open to all and would like to encourage you to come along. There will also be breakaway spaces on the 27th Floor of the Sky Hotel on Monday and Wednesday that you are welcome to come and use.

On behalf of Madman Entertainment and from the team behind Red Obsession comes BLIND AMBITION.

Wining the Audience Award for Best Documentary at the Sydney and Tribeca Film Festivals, this powerful and uplifting story about four Zimbabwean refugees who conquered the odds to become South Africa’s top wine stewards or as they’re known professionally, sommeliers, set their sights on the coveted title of ‘World Wine Tasting Champions’.

Directed by Australian filmmakers Warwick Ross and Rob Coe, Blind Ambition tells the story of Tinashe, Pardon, Joseph and Marlvin: the world’s unlikeliest sommeliers. An uplifting story of hope, courage and determination, BLIND AMBITION is the “Cool Runnings” of the wine world.

If you haven’t yet seen the trailer, please click on the following link: https://youtu.be/ci7DaP0gV_I

This documentary was released in Sydney, Australia on 3 March 2022.

A “Commonwealth Business Forum (CBF)” is being held on the edges of the Commonwealth Heads of Government Meeting that is taking place in Rwanda from the 20th June 2022. To all Australian companies that are active or have interest in Africa, please find attached copy of the programme.

For any questions or queries, please contact Mr Scott Morriss, Trade Commissioner – Africa, on: Scott.Morriss@austrade.gov.au or Tel: +27 11 911 4501 who will in turn get in touch with the Australian contacts that are connected to organising this event.  More information on this forum can be viewed or downloaded here.

For updates on the webinars held recently

The Australian Trade and Investment Commission (Austrade), in partnership with the Botswana Investment and Trade Centre held a “Doing Business with Botswana” Webinar event last week.

If you were unable to make it, please find below link of the recording and copy of the presentation slides:

Attendees included Government officials from Australia, Botswana, and South Africa, METS companies doing business in Botswana as well as those who are looking to enter different markets in Africa.

Following the recent announcement that the World’s Premier Mineral Exploration & Mining Convention – PDAC will be moving to June, Fasken have decided that it will continue with their scheduled program for March and would like to invite all ABCSA members that are interested in attending.  The webinar events will take place from 2 to 9 March 2022. All sessions will be held virtually and will continue to provide you with the most updated legal trends in mining. Fasken will have additional sessions that will be offered in June.

For the Fasken Annual Seminar Series, please click on any of the event titles to register for the event.

This will not only cover the mining industry but across the whole gambit of industries thus giving ABCSA a broader base to work from. In business, access to commercial and government networks is critical.

The Australian Business Chamber (Southern Africa) brings you access to a dynamic membership base. Africa is home to 6 of the top 10 fastest growing countries in the world and Australian exports to sub-Saharan Africa now top $11 billion a year.

We want to help you tap into those markets.

The Australian Business Chamber Southern Africa (ABCSA) is seeking an external qualified and registered auditor to audit its financial statements for 3 years.  Please click on the link for a  detailed scope of work. Please submit proposals before close of business on 26 August 2022.

You can find out more about which cookies we are using or switch them off in settings.

This website uses cookies so that we can provide you with the best user experience possible. Cookie information is stored in your browser and performs functions such as recognising you when you return to our website and helping our team to understand which sections of the website you find most interesting and useful.

Strictly Necessary Cookie should be enabled at all times so that we can save your preferences for cookie settings.

If you disable this cookie, we will not be able to save your preferences. This means that every time you visit this website you will need to enable or disable cookies again.